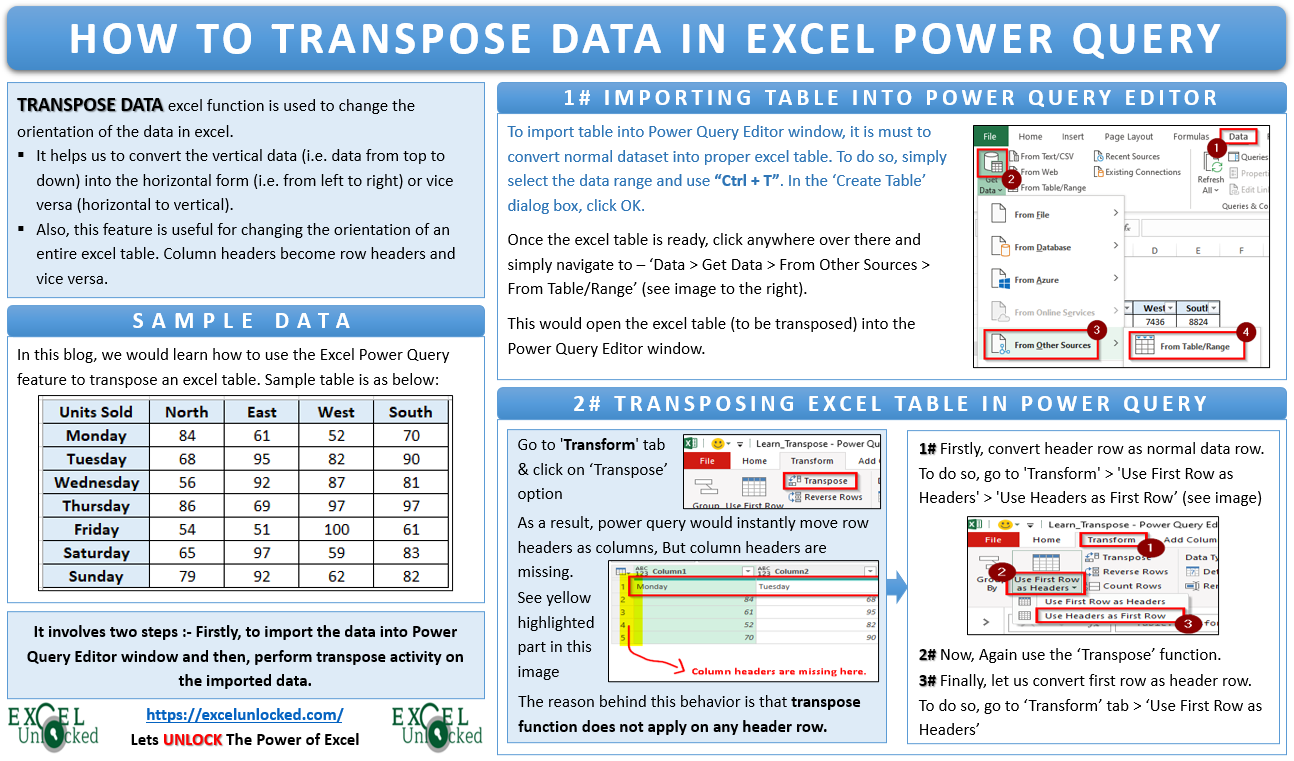 Transpose Data excel function is used to change the orientation of the data in excel. By changing the orientation, it means to convert the vertical data (i.e. data from top to down) into the horizontal form (i.e. from left to right) or vice versa (horizontal to vertical). Additionally, this feature is also useful for changing the orientation of an entire excel table, i.e. convert the column headers of an excel table into row headers and the row headers into column headers. In this tutorial, we would learn how to use the excel power query feature to transpose an excel table.

The below image shows the number of units sold by a company during a week in four regions.

Let us learn how to transpose this table using the Power Query Editor window.

The Excel Power Query feature is an amazing tool provided by Microsoft in newer versions of Excel. Are you using older Excel versions? Then check for the compatibility here.

For me, the Power Quer feature is like a lifesaver tool provided by Excel. The basic purpose of this feature is to import and get data from excel tables, ranges, and outside excel sources like Text files, JSON, PDFs, etc. into an Excel workbook. Also, you can transform the imported data as per your wish and need.

Transposing of excel table is one of the other transformations that the power query feature can do for you.

To convert a normal dataset into a proper excel format, select the table range, and follow this path – ‘Insert’ > ‘Tables’ group > ‘Table’ option (as shown below).

More details on Excel Table Format can be found in this link.

Now, once a proper excel table is ready, we can easily import this excel table into the power query editor window.

Click anywhere on the excel table that you want to import to the power query editor window and then go to Data > Get Data > From Other Sources > From Table/Range.

The excel table (to be transposed) is now in the Power Query Editor window, as shown in the image below.

The Transpose option is available under the ‘Transform’ tab > ‘Table’ group.

If you click this icon, the power query editor window would instantly move the row headers as columns.

But did you notice that the ‘Transpose’ option did not move the column headers (North, East, West, South) as the row headers? Column headers are missing while transposing the table in Power Query.

The reason for this weird excel behavior is that the transpose function does not apply on any header row.

Finally, let us now quickly load this new transposed table back to the excel worksheet. Simply, go to the ‘Home’ tab and choose the option ‘Close & Load’.