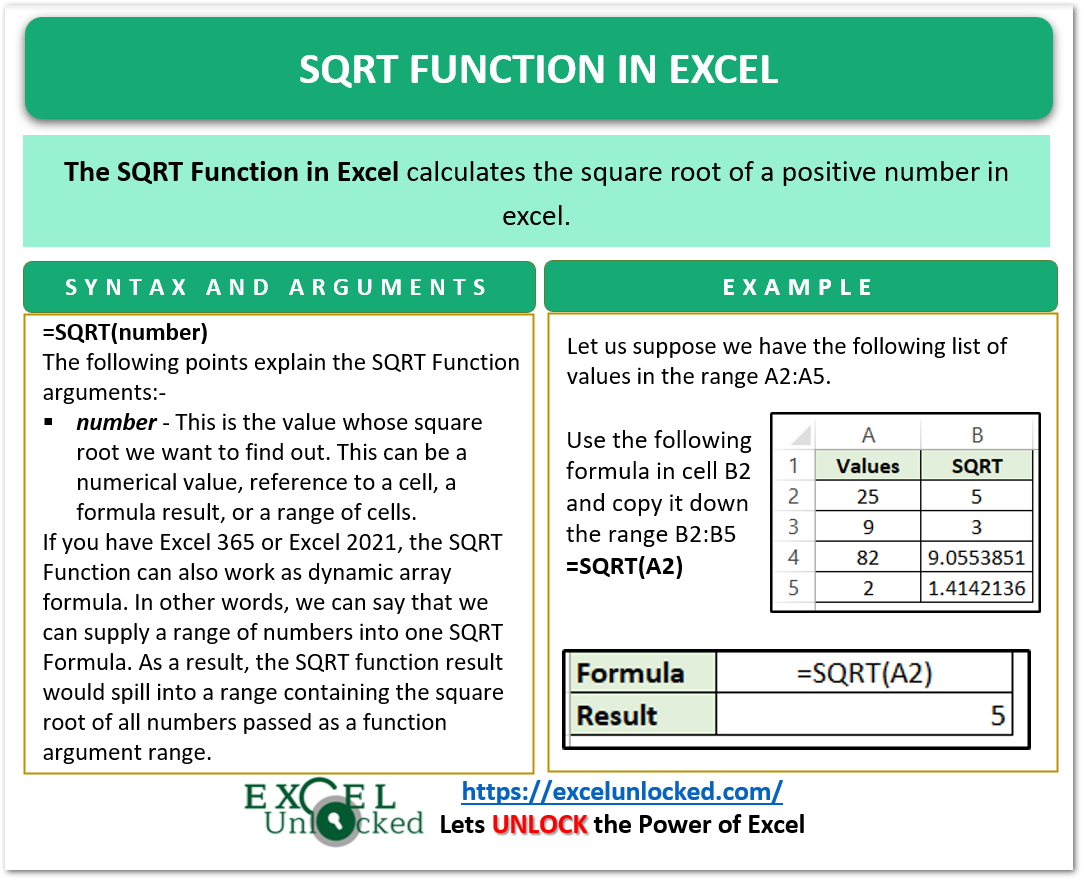 The SQRT Function in Excel is a type of Mathematical function. The Function is useful for mathematical calculations. So let’s start learning.

When to use SQRT Function in Excel?

As the name suggests, the Excel SQRT function calculates any number’s square root. The SQRT function works the same as the POWER Function.

The SQRT Function returns a #NUM! error if we try to find the square root of any negative number.

The following points would explain to you the SQRT Function inputs.

Points to Remember about the SQRT Formula

The following points about the SQRT Function must be kept in mind before implementing the formula.

Examples to learn the usage of SQRT Formula

In this section of the blog, we would perform some practical experimentation with the SQRT formula in Excel.

Let us suppose we have the following set of numerical values in the range A2:A7.

Use the following formula in cell B2.

As a result, the formula gives us the square root of the values in the range A2:A7.

Explanation – We have supplied the cells in the range A2:A7 as SQRT function input to get the results in range B2:B7. The square root of 16 and 9 is 4 and 3 respectively.

Cell A4 contains a negative value which is why the function returns a #NUM! error.

34 is not a perfect square number therefore the SQRT function returns the result as 5.830951895

The numerical value of the date in cell A7 is 6. The SQRT function returns the result based on that value.

If we have negative values in our data set and we want to compute the Square root value based on its positive/absolute value, then we can use the ABS function along with the SQRT Function.

For Example, let us suppose we have the following set of values.

Use the following formula in cell B2.

Copy the formula down the range B2:B5.

As a result, the formula returns 4 as the square root of value in cell A2.

When a number x that is not a perfect square is passed to the SQRT Function, returns a number with too many digits after the decimal. For instance.

We can round off this result to a certain number of digits by using the ROUND Function in Excel.

where x is the actual number and y is the number of digits we want after the decimal in the SQRT result.

Use the following formula to find the square root of 45 rounded up to 2 digits after the decimal.