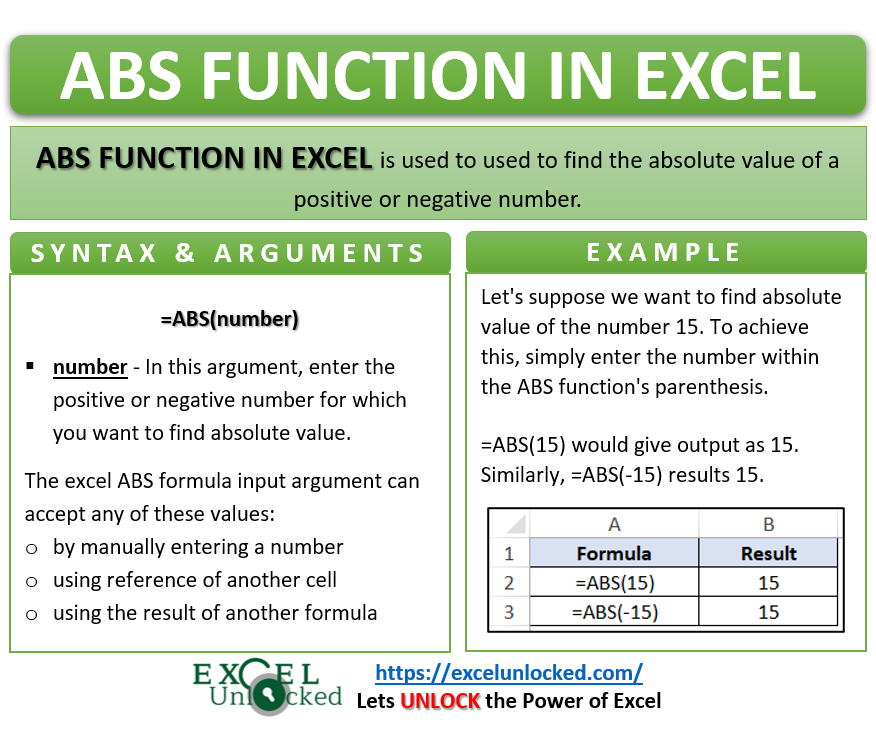 The ABS function in excel is a mathematical excel formula which is a useful function to change and convert negative number to positive number in excel.

This function is very useful to remove the minus (-) sign from the number and make it a positive value.

What does ABS mean

The expansion of ABS is nothing but ‘absolute’.

In simple terms, the term ‘absolute value‘ refers to the distance of any number (positive/negative) from zero (0), regardless of its sign. It means:

When To Use ABS Function in Excel

It is very clear from the above section that the one and only purpose of using the ABS formula in excel is to find the absolute value of a positive or negative number.

The only argument of ABS excel function is ‘number‘.

Let’s suppose we want to find the absolute value of the number 15. To achieve this, simply enter the number within the ABS function’s parenthesis.

As a result, excel would give output as 15.

Do Not Miss This Point

The excel ABS formula input argument can accept any of these values:

Finally, you have an overall understanding of how ABS function works in excel.

Now, let us see practical applicability of this function.

How is ABS Function Practically Used in Real-Life?

The practical applicability of the Excel ABS function is limited. In most real-life excel situations, I use this function for converting negative numbers into positive values. This function helps to delete the minus sign before a number and make it positive.

Look at the example below:

To do so, simply put the difference formula into the ABS function as demonstrated below:

Explanation – In the above formula, the A4-B4 find difference between 15 and 20, which comes to -5. And the =ABS Formula then converts this negative 5 into positive 5 (See column E in the above image)