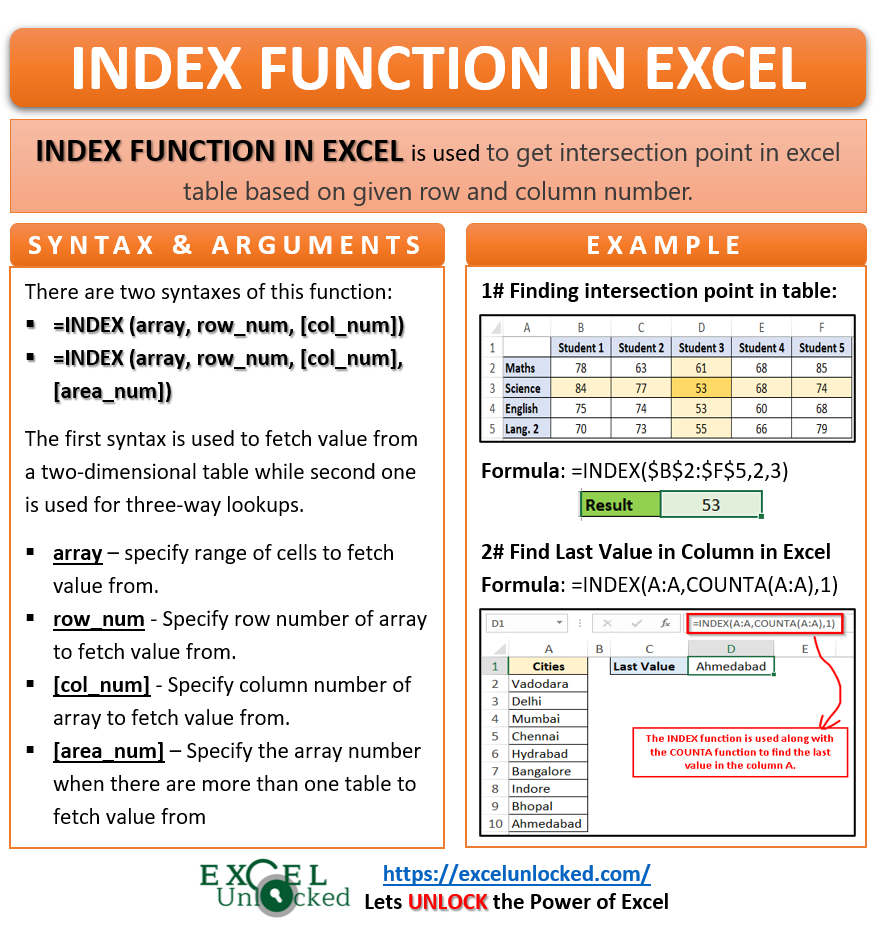 The INDEX function in excel is one of the highly used excel formula to fetch particular data from a table based on the row and column number.

In this tutorial, we would unlock how the INDEX formula in excel works along with its syntax, arguments, and examples.

So let us begin 😎

When to Use Excel INDEX Function

The excel INDEX formula is an amazing function that is useful to get the intersection point in the table based on the given row number and the column number. It is useful to fetch a particular value from table data.

See the image below for understanding:

In the above diagram, the INDEX excel formula helps in finding the intersect value ’53’ for the rows and columns in excel.

Unlike the other excel formulas and function, the INDEX formula has two syntaxes.

How the Two Formula Syntaxes Differ?

Let us now discuss about the four arguments of the INDEX formula:

Now, when you are aware of the purpose of the INDEX excel formula and its syntaxes and arguments, it’s time to take one basic example to understand how the INDEX function works in excel.

1# How to Find Intersection Point in Excel Using INDEX function

Let us take the example shown above:

To find the marks obtained by ‘Student 3’ in ‘Science’, simply use the following formula:

As a result excel would return the value 53.

2# Find Last Value in a Column in Excel

Using the INDEX function along with the COUNTA formula is helpful in finding the last value in the column in excel.

In the below image, columln A consist of the names of Indian cities. Now, we want to find what is the the last value in this column.

To achieve it, use the following formula:

Now, if you add any new city in the 11th row, the formula would automatically update. See the illustration below: