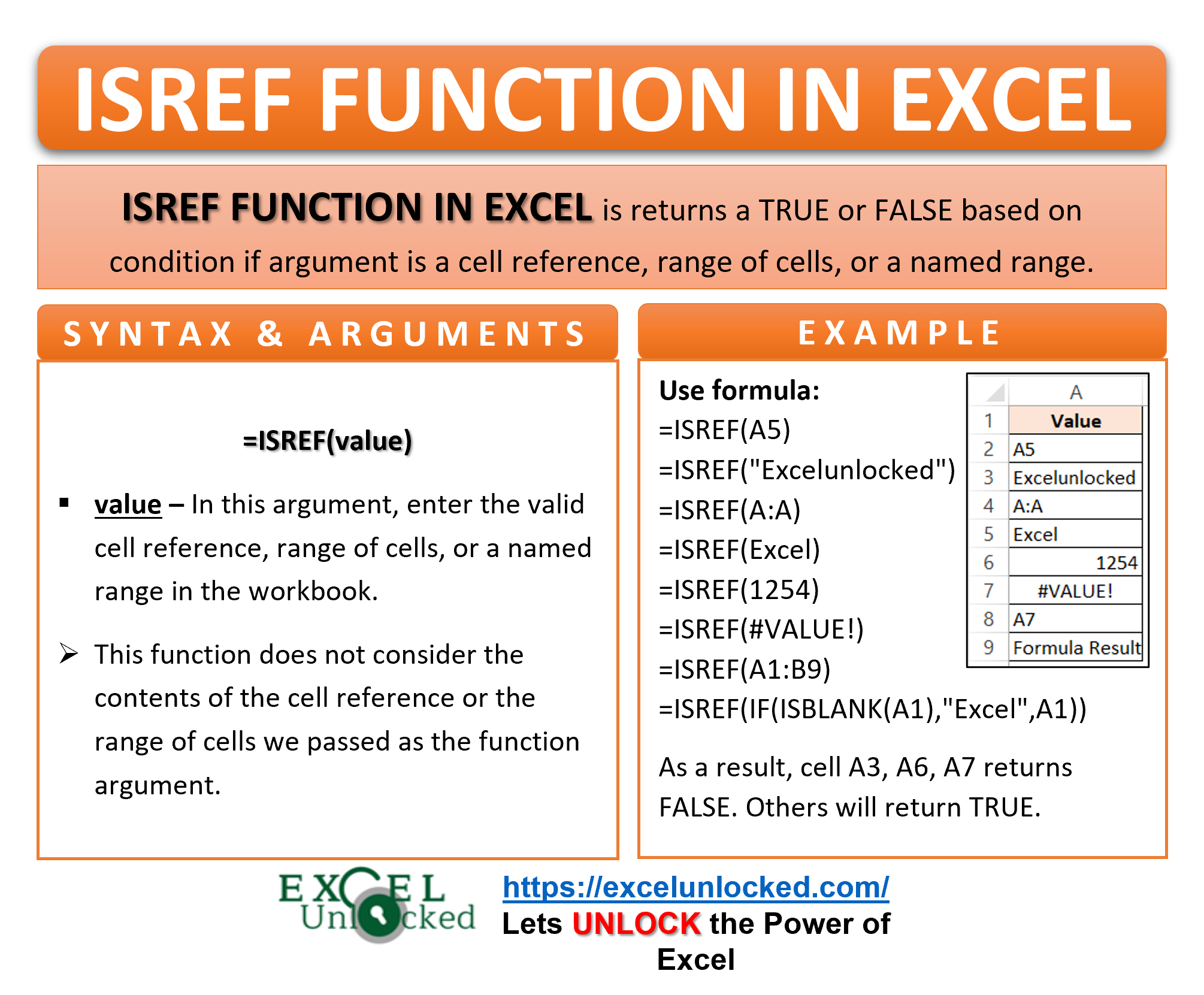 A cell reference refers to the specific address of each cell in the spreadsheet. The column number is represented by alphabets from A to XFD while there is a serial number for each row in Excel. In the cell address, first comes the Column alphabet, and thereafter is the row number i.e A1 (cell where the column A and row 1 intersect). The ISREF Function of Excel is all about references.

These cell references can be the result of many other formulas like the OFFSET Function, INDEX Function, or INDIRECT Function. This is when the use of the ISREF comes.

When to Use Excel ISREF Formula

The word ISREF represents “Is it a cell reference?”. The ISREF function returns a logical TRUE or FALSE based on the condition if the passed argument is a cell reference, range of cells, or a named range.

This function can check if the result of any other formula is a cell reference or not. This function is categorized under the Information Functions of Excel.

The below point explains the required function argument for Excel ISREF Formula.

There is no optional argument in the ISREF Formula.

Points to Remember About ISREF Function

The following points should be kept in mind while using the ISREF formula.

In this section of the blog, we will perform some practical examples to know more about the ISREF Function of Excel.

Let us pass different types of function arguments to get the results for the ISREF formula. Below are the values.

Use the following formulas in order to get the results.

As a result, the formula has returned logical TRUE/FALSE for different function arguments.

Explanation – There is cell reference, an entire column reference, Named range, range in the formula contained in cells B2, B4, B5, B8. Consequently, as a result, the formula has returned a logical TRUE for them.

The cells B3, B6, B7 contain a text string, numerical value, and an error. Therefore the formula returns a Logical FALSE for them.

Ex. 2 – Using INDIRECT Formula with ISREF to Check the Validity of a Named Range

In this example, let us say we have the sales of two companies named Fashion Look and New Fashion. Below are the order details.

Now, first of all, we will create named ranges for all the columns from A to F.

Below are the steps to create named ranges for all columns at once.

As a result, we can check if the named ranges have been created as valid cell references using this Formula. Use the following formula.

The range of cells in the yellow box contains the name of the range for each of those columns (A to F).

The Red Box contains the named range whose validity we want to check for.

Green Box contains the Status of the named range entered in cell C12.

As a result, the formula has returned a text string “Exists” for the named range Order_ID.

When We enter a named range like Customer ID in cell C12. This happens to be the result.

As a result, the formula told us that this named range does not exist i.e we never created this range in this workbook.

Explanation – Let us see in steps, how does the formula work.

When we entered Order_ID in cell C12, the INDIRECT Function picks the text string from C12 and creates a reference to that range. As a result, the ISREF formula returned a logical TRUE because its input argument is a reference to a named range (A2:A8). The condition is TRUE and the result is a text string “Exists”.

Thereafter when we tried to check the validity for Customer ID as the cell reference, the INDIRECT Function did not find any reference to it. It returned a #REF! error. After that. the #REF! passed as the function argument of ISREF. The ISREF Function gives a logical FALSE for the Error values. Consequently, the condition becomes FALSE and the IF formula gives a text string “Not Exists”.

With this, we had like to end the ISREF Function blog, but there is so much more to learn.

Thank you for reading 😉