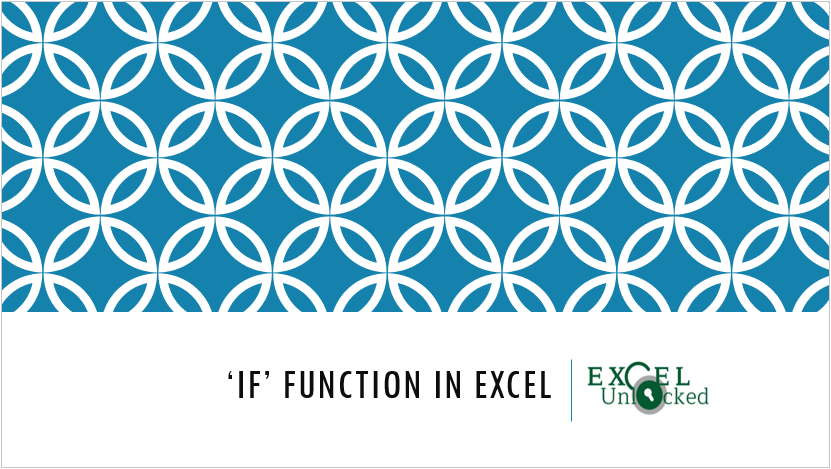 Excel IF Function is another very useful and a lot used logical excel formula which checks for the fulfillment of condition in excel. In this tutorial, we would cover the following points on the IF formula in Excel:

Purpose of IF Function in Excel

As mentioned in the introduction, the =IF() formula is a logical excel function that is used to check a specified condition in Excel and return a particular text/value based on the condition.

Syntax and Arguments of IF Function

There are three basic arguments of the excel IF formula:

Simple Example of Using IF Function in Excel

Let us take one very simple example in excel to understand how the IF formula works in excel.

Suppose in order to pass an examination, a student needs a minimum of 40 marks in a subject. the below image shows the marks obtained by different students in a subject.

In the above example, in order to determine if the student has passed or failed the examination, simply use the following formula:

Explanation of the above IF function – The formula first checks the test condition (i.e. if marks in cell B2 is greater than equal to 40). If the condition matches, then excel returns the text ‘Pass’, otherwise it returns ‘Fail’.

In the above example, we have used the logical operator ‘greater than equal to’ to check for the minimum marks of 40. Below is the list of other excel logical operators-

Now, when you have some basic understanding of how the Excel IF function works, let us learn some important facts and points about the IF formula.

What is Nested IF Function and How to Use with Example

When you check an IF condition inside another IF condition then it is called as nested IF. This means that you can create a formula or function which checks multiple IF conditions in a sequence.

Let us take one simple example how the multiple IF formula works.

Note that here excel checks for the condition fulfilment in a sequence.

Other Practical Example of IF Function in Excel

The IF excel formula is very useful in finding the commission of the salesperson based on the target achievement or sales.

There are many other such practical areas where the IF function can be used in excel. In fact, this is the most used excel function.