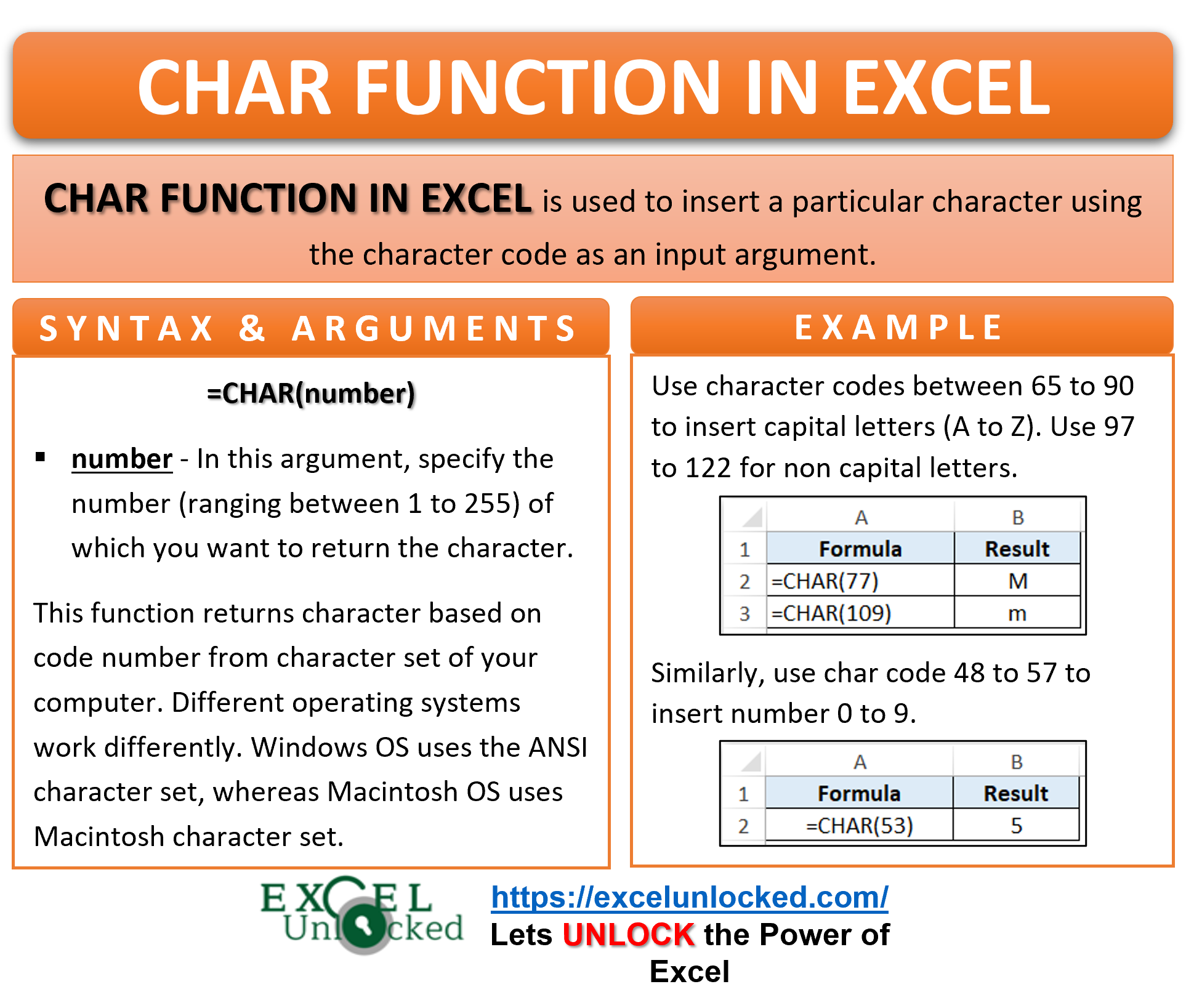 Using the Excel CHAR function, you can use the character number to insert a symbol in excel.

When To Use CHAR Function in Excel

CHAR formula is used to insert a particular character using the character code as an input argument. This function belongs to the Text function group, therefore the result of this function is a text formatted value.

The function returns the character based on the code number from the character set of your computer. Different operating systems work differently in this regard.

In this tutorial, we would cover the Windows OS ANSI character set for understanding.

The argument of the CHAR function is explained as below:

As mentioned in the above section, this function will return a different result in different operating systems.

Finally, let us now learn how to use the CHAR function in excel with the help of examples.

You can use the character number code and insert letters in the excel cell (both capital letters and small).

To insert the capital ‘M’ letter in a cell using the ANSI Code, simply use the following formula.

Similarly, to enter a non-capital ‘m’ letter in excel cell, use this formula:

Similarly, use the ANSI code values from 48 to 57 (in sequence) to insert numbers between 0 and 9 in an excel cell using the CHAR formula.

Therefore, to return the number 5 using ANSI code, use the following formula:

The following image shows the CHAR codes for the ©, ®, and ™ symbols in excel.

See the below example formula:

As a result, excel returns the three symbols as shown in the image below:

Use CONCATENATE, CONCAT, TEXTJOIN, or the ampersand (&) symbol to combine a text and above symbols, like this:

As a result, excel would return the output as – ExcelUnlocked® in a cell.

The highly used practical application of the CHAR function is for inserting line breaks in a cell. I have already explained how to insert line breaks in an excel cell in a separate tutorial here.

Also, check this link to learn about how to insert degree symbol in excel using different methods (including CHAR formula code).

List of All ANSI Character Codes for CHAR Excel Function

This brings us to the end of the tutorial on CHAR excel formula.