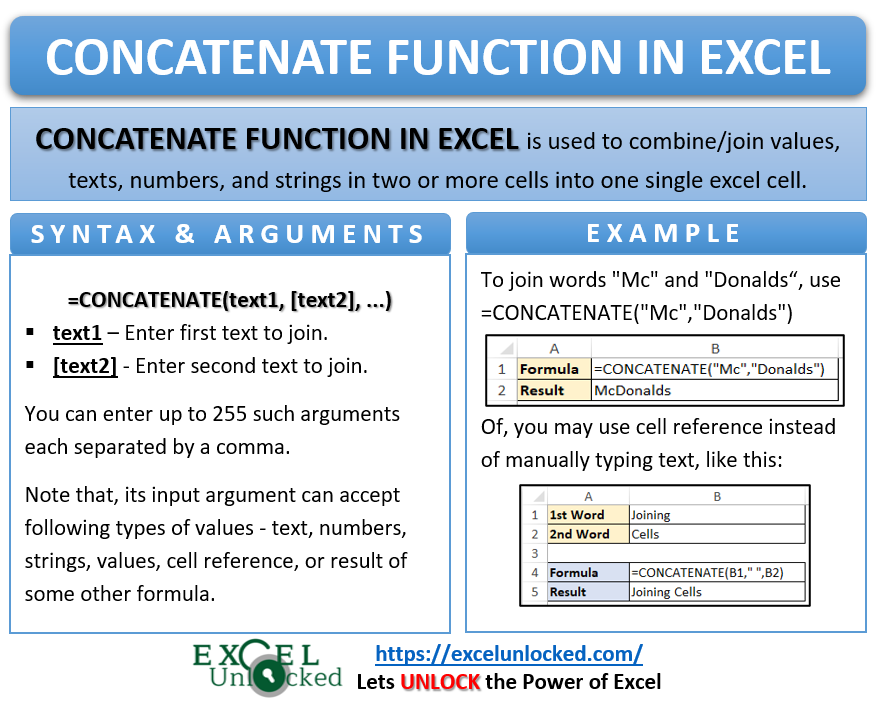 The English meaning of the word ‘Concatenate‘ is to join two or more things, and the same applies to excel as well. The CONCATENATE function in excel is the formula that will solve this excel query – “How to combine texts, numbers, values, and characters in two or more cells into one single cell?“

In this tutorial, we would learn how to use the CONCATENATE Excel formula to join cell values in excel along with its syntax, arguments, and some examples.

When to Use CONCATENATE Function in Excel

CONCATENATE formula in excel is a useful function to combine/join values, texts, numbers, and strings in two or more cells into one single excel cell. This function forms part of the ‘Text function group’ in excel.

This formula returns a joined value/string.

In a similar way, you can enter up to 255 such text arguments each separated by a comma, like this:

Note that, the CONCATENATE function’s input argument can accept following types of values:

In this section, we would learn how the CONCATENATE function works in excel with the help of few examples.

This is a basic example showing the working of CONCATENATE excel formula. Suppose you want to join the words “Mc” and “Donalds” in excel.

To achieve this, simply specify the two words as CONCATENATE function’s input arguments, like this:

As a result, you would get a combined word in excel “McDonalds”.

Similarly, the formula =CONCATENATE(“Excel”,”Unlocked”) with result into a combined text “ExcelUnlocked”.

Note that, when you use the CONCATENATE function, excel does not put any delimiter like space, colon, semi-colon and so on.

To combine two texts with space in between two words, you need to manually put the space within double-quotes like this:

Instead of manually typing the texts/words inside the function argument within double-quotes, you can also use the cell reference.

Cell B1 contains the first word, and B2 contains the second word. To join the texts in these two cells with space in between, use the following formula:

We can also combine text characters and cell values using a single CONCATENATE formula. Let us see how.

Now, suppose you want to write the text ‘PROD-‘ before each of these material codes.

To achieve this, use the following formula in cell B2 and copy it down to the below cells.

As a result, excel inserts the text ‘PROD-‘ before each of the material codes.

Now, let us see how to combine a text and a formula result in excel using the excel CONCATENATE function.

Suppose, you want to write today’s date in a cell prefixed with the text – ‘Today’s date is ‘, such that the date changes every day.

To achieve this, we shall use the TODAY excel function to find today’s date and then concatenate it with the text ‘Today’s date is’ using CONCATENATE function.

See the below formula:

The excel TEXT function (in the above example) converts today’s date serial number into a date format (dd-mm-yyyy).

In the above examples, we learned how to combine text, characters, and strings in excel. In this example, let us learn to combine numbers in several cells into one cell.

Below image contains a list of numbers in excel to join in excel.

Simply use the below formula to join numbers in excel using the CONCATENATE excel function.