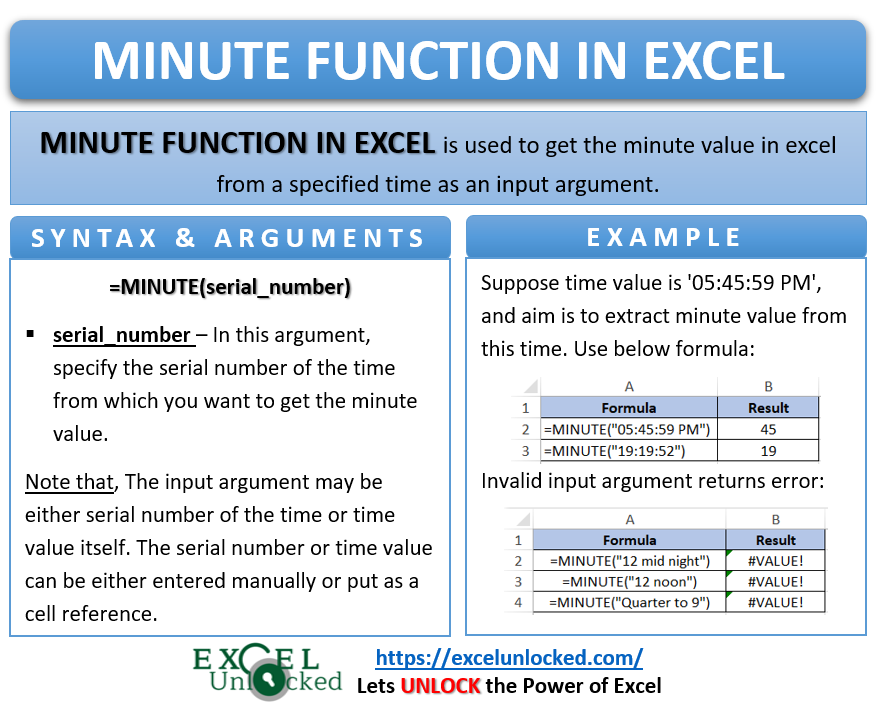 In this blog, we would unlock one of the excel time function called the Excel MINUTE formula. This tutorial would cover the purpose and objective of the MINUTE formula in Excel along with its syntax and arguments. We would also take some simple examples and illustrations to understand the MINUTE function of Excel.

Purpose of MINUTE Function in Excel

The =MINUTE formula in excel enables an excel user to get the minute value from a specific time by entering the time value or the serial number of time as its input argument.

As a result, the output of this formula will be any value that ranges between 0 to 59. Simply, ‘0’ represents 0 minutes and ’59’ represents 59 minutes.

The MINUTE formula has only one input argument which is – serial_number.

You may put the time value or serial number directly as an input argument or a reference to another cell.

The time value input argument must be put within double-quotes to avoid formula error in excel.

In this section, I would like to give one simple example to understand how the MINUTE formula works.

To achieve this, simply enter the time value within double-quotes as an input argument of MINUTE function as shown below:

Finally, we have completed with this tutorial on everything about MINUTE function in excel. Thank You 🙂