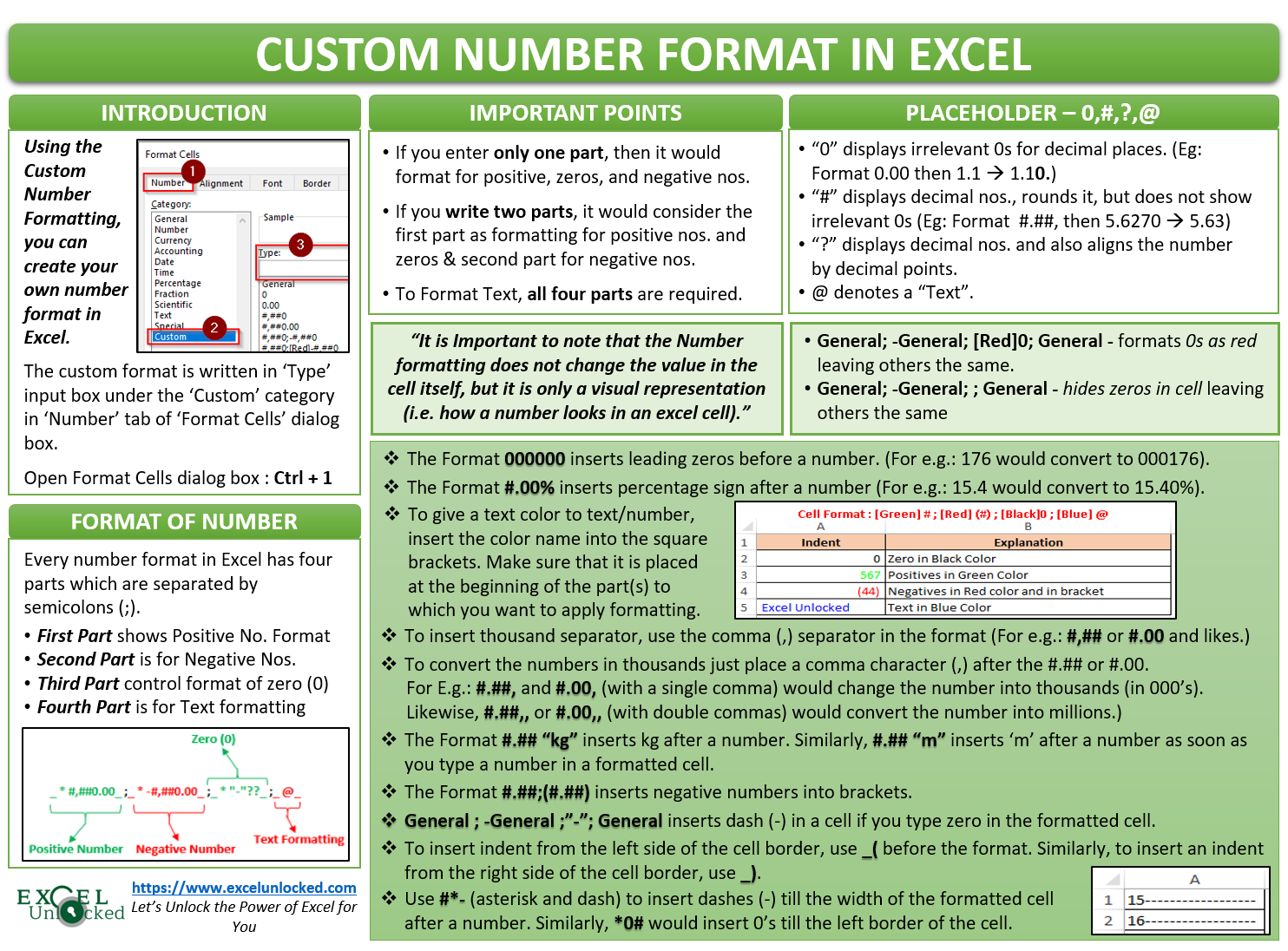 While working with cells in Microsoft Excel, you may have come across various pre-defined cell formats that you can use to format the numbers, etc. But, many a time, you may have a requirement to have something different than what the excel has provided. With the custom excel number format option in Excel, you can create your own custom format that meets your needs.

The custom excel number format is a very powerful tool that may seem to be complex, but trust me, it is very easy if you understand its structure.

In this tutorial, we would unlock this feature in Excel and master you with the excel number format.

Where is the Custom Excel Number Format Feature?

The Excel Custom Number Formatting feature is available in the ‘Format Cells’ dialog box under the ‘Numbers’ tab.

You can use any of the below paths to navigate to the ‘Format Cells’ dialog box.

In the Format Cells dialog box, under the ‘Numbers’ tab, you would find the ‘Custom’ category. Click on this category and you would find the ‘Type’ input box. In this input box, you can enter your own customized format. It would get saved for future use, once you click on the ‘OK’ button.

Instead of creating a new format from scratch, you can use the pre-provided custom number format from the list (as you can see from the screenshot above). However, in order to use these weird-looking formats, you need to first learn what these symbols mean.

In order to learn to create your own new format, it is important to first know how Excel read and understand these symbols.

Every number format in Excel has four parts which are separated by semicolons (;).

Let us take one pre-defined number format to understand it and summarize in a pictorial manner.

Some Important Points To Note

It is pertinent to note that the Number formatting does not change the value in the cell itself, but it is only a visual representation (i.e. how a number looks in an excel cell).

This would format the positive, negative, and texts as a default excel format, but zero would be in Red color.

If you want to hide any particular type of cell content, then leave that part as blank. For Example, to hide all zeros, the format would be:

There is nothing between the last and the second last semicolons.

The four basic placeholders in a custom number formatting, that everyone should know are 0, #, ?, and @.The “0” placeholder displays zeros for the decimal places. For example – If positive number format is #.00, then if you type 1.1 in the formatted cell, the excel would convert it to 1.10.

However, it is important to note that all the digits in number before a decimal point, will be displayed even if the formatting is set as #.##.

Similarly, there are many such characters like _(underscore), *(asterisk), “ “(double inverted commas), ,(Commas), /(forward slash), \(backslash), which we would discuss in the latter part of this blog, as we proceed.

Insert Zeros Before A Number in Excel

Many a time, you may want to add leading zeros before a number in Excel, like 000176, to make the number of specific character length (like 6 characters long). But when you type 000176 in an excel cell (having general/number formatting), it would return the value as 176 (because mathematically, the number 000176 is equal to 176).

However, there are multiple ways to insert 0 before a number in Excel. In this section, we would focus on using the custom number format to achieve this task.

There is a specific category under the ‘Format Cells’ dialog box to insert the percentage symbol to a number in Excel.

Additionally, you can even use custom formatting to insert the percentage after a number in Excel. Use the format – #.00% OR #.##%

Using Colors in the Custom Formatting

You can give different colors to different parts of a custom format. There are mainly eight colors which are supported by the custom excel number format which are:

Always remember that the color should be written at the starting of the part to which you want to add color formatting. Also, the color names should be included within the square brackets.

Below is an example for your reference:

How to Insert a Thousand Separator ?

To insert a thousand separator, use the comma character (,) followed by digit placeholders (0, # and ?).

The below image shows how the combinations would work.

Make sure that you do not enter any digit placeholder after this comma(s).

The below image is self-explanatory.

Enter Text and Numbers in The Same Cell

When you simply enter any number followed or preceded by a text character in the same cell, the number loses its number property. It means that excel will not allow you to do any number operation like addition, subtraction, division, and multiplication with this string.

However, using the excel custom number format feature, you can create your own format, without changing the property of a number. Below is the trick.

Similarly, you can combine this trick with the ‘Convert number into a thousand’ trick to show that the numbers are in thousands/millions.

Refer to the below screenshot:

As you can see in the highlighted part in the above screenshot – the number remains a number and did not change its property.

Alternatively, if you wish to enter only one character text after the number then you can even use backslash instead of “ “, – #.## /m

Similarly, you can insert the other special symbols using the ASCII Code.

Like the Special Symbols, you can even insert currencies symbols using the Alt key followed by an ASCII code. Below are some of the examples of the ASCII codes corresponding to the currency symbols:

Convert Number to Fraction in Excel

When your cell(s) format is ‘General’ or ‘Number’, you cannot enter a fraction (numerator/denominator) in that cell. For example, in a ‘Number’ formatted cell, you can write 0.90 but cannot write its fraction form 9/10.

To insert a fraction for a number, excel has pre-provided a ‘Fraction’ category, which we have discussed in one of our previous blogs on ‘Format Cell Content – Excel Number Format’.

Additionally, you can create your own custom fraction format by writing the format in the ‘Custom’ category.

You can even create a fixed base fraction number format by entering the fixed base digit after the forward-slash (/) in the cell custom format.

For example, to have a fixed denominator as 6, the format code would be # #/6.

As discussed at the inception of this blog, there are four parts of any custom number format separated by semicolons.

Just to recall, if you enter only one part/section in the ‘Custom’ category of this dialog box, then excel would apply this formatting to all the numbers.

Now, to display the negative numbers in the bracket (parenthesis), just insert the format inside Round brackets (parenthesis).

In the above format, the first part (before semicolon represents a positive number and the second part represents negative numbers, and the Round brackets would display them in brackets.

To show the cell that contains zero as dash, you can use the ‘Accounting’ category under the ‘Format Cells’ dialog box. To learn about all the categories, follow our previous blog on ‘Format Cell Content – Excel Number Format’.

Additionally, you can create a new custom format for achieving this. As we know that the third section represents format for ‘zero (0)’, you can enter the dash (-) under double inverted commas to insert a dash in the cell where you enter zero.

Similarly, to keep the cell as blank, do not enter anything in the third part, and leave it as it is:

You can, however, add indents and insert one or more character space from the right/left borders of the cell using the underscore (_).

The above format would insert negative numbers into brackets (#). It would also give an indent from the right border by one character so that the ones digit in the positive numbers are exactly aligned to the ones digit of the negative number #_). The empty third part means zero should get converted to blank. It would also put one character space from the left of the text. Refer to the below image.

The excel custom formatting feature would prove to be a helpful feature when you wish to repeat a specific character until the column width ends.

For example, you want to type a number in a cell, and the excel inserts leading zeros before it (extended up to the left border of that cell)

To do so, first, enter an asterisk (*) symbol and then type the character that you want to repeat.

Let’s format our cell-like if you type a number, the excel should lead it with zeros up to the width of the cell. Enter the following in the ‘Type’ input box under the ‘Custom’ category.

This would insert the 0’s before the number in the formatted cell. The zeros would extend till the width of the cell. Below is the screenshot for your reference.

Similarly, #*- would insert dashes (—–) after the number.

This technique is very useful when you want to change the alignment of the text/number in a cell. By default, every number is right-aligned and a text is left aligned. You can use the below custom format to achieve this.

To Right-align the text, use format: @*

To Left align the number, use format: *#

To do so, enter the mathematical operator before the number format enclosed in square brackets [ ].

Let’s take one small and simple example. The number should be in red color if the value is less than 50000 and in black color, if it is more than and equal to 50000. Between these two numbers, the color should be black. To achieve this, enter the use the below format:

This brings us to the end of the custom number formatting in Excel. Similarly, there is a lot to know about the custom date and time format in Excel.